In honor of Shakespeare’s 400th death-day, the New York Times celebrated by commissioning four writers to create “lost” scenes from Shakespeare plays. The entry for Romeo and Juliet, called ‘How Fast Love Curdles,’ had a premise that probably sounds familiar: the teenage lovers are nothing but hormone-addled idiots, their star-crossed love just adolescent lust. The piece is meant to be comedy, but it offers nothing more than the class smart-aleck in tenth grade English probably already pointed out. And it is in keeping with a frustratingly common dismissal of the play, rooted in disdain for its young central lovers.

Though it’s one of the most popular and most produced Shakespeare plays, scorn for Romeo and Juliet abounds. I wrote a blog post for Shakespeare’s Globe last summer, and for some reason, half the people who reblogged it on Tumblr felt the need to mention in the tags how much they hated the play. Professed Shakespeare fans on my Facebook page will periodically circulate this post: 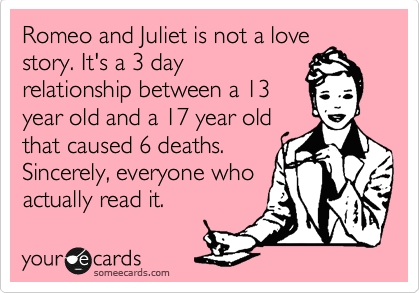 Setting aside the fact that ‘everyone who actually read it’ would notice that Romeo’s age is not specified, the smug tone that suggests those who really understand the play gets my hackles up for a whole host of reasons– not least of which being, this cynical reading is emphatically wrong. No, not an alternate take, not a deconstruction: wrong. Antony and Cleopatra is, arguably, a story about a probably misguided relationship that directly leads to a lot of deaths. ‘Tis Pity She’s a Whore is almost definitely that. But to cast Romeo and Juliet as anything other than the victims of their own play- a status that the text of the play works very hard to make explicitly clear- is to completely miss the point of the tragedy and to strip it of its most radical commentary.

Start from the beginning. The prologue (always a useful means of signaling a play’s intentions) doesn’t even mention the leading lovers’ names. It is focused on the city of Verona itself. The first four lines are solely dedicated to the Montague-Capulet feud. After that, every mention of the lovers is contextualized by their relationship to both the feud and the city at large:

From forth the fatal loins of these two foes,
A pair of star-cross’d lovers take their life;
Whose misadventure’d piteous overthrows
Do with their death bury their parents’ strife.
The fearful passage of their death-mark’d love,
And the continuance of their parents’ rage,
Which but their children’s end, naught could remove,
Is now the two hours’ traffic of our stage.

You could easily come away from this prologue expecting an equal split in the play to follow between lovers and politicians. Something is rotten in the state of Verona, and Shakespeare sets up the promise of an almost Christ-like redemption of the families through the love and deaths of their children.

While it’s easy to gloss over Romeo and Juliet’s extreme decisions in the latter half of the play as nothing more than the overreactions of teenagers, they’re pushed into all of them by outside forces: by the banishment of Romeo, who the Prince himself admits is just a scapegoat upon whom he can avenge his kinsman Mercutio’s murder; by Lord Capulet’s violent threats in the face of Juliet’s refusal to marry; and of course, by the feud, which binds the lovers to secrecy in the first place. Though youthful passion (of course not a force to be completely dismissed) drives Romeo and Juliet to one another, and to make some of the mistakes that hasten their downfall, Shakespeare provides continual reminders that their choices are also guided by unrelenting pressure from those in power to just give in to unthinking obedience and meaningless traditions of violence and revenge.

But are they even in love? the cynics will ask. Yes, they are. To argue otherwise is to completely ignore Shakespeare’s stylistic hints, or to suggest that Shakespeare’s use of verse is entirely meaningless. When Romeo and Juliet meet and talk, creating a sonnet with their dialogue that culminates in a kiss, the change that they undergo can hardly be understated. Romeo has punned with Mercutio and Benvolio and pined for the disinterested Rosaline, but Juliet is the first character who understands the language he is trying to speak. Throughout his early scenes, Romeo presents his friends with rhyming couplets which they use only to make witty quips. Juliet hears, understands, and builds a poem with him. Likewise, in contrast to an introductory scene in which Juliet can barely get a word in, Romeo listens to and welcomes her wit.

To imagine that their relationship is nothing more than emotionless lust, that Romeo and Juliet are to be blamed for everything that follows, is to entirely flip the redemptive promise of the play: that violence, hate, and fear can be undone by a radical act of love. The Prince’s final lines don’t place the blame on thoughtless youth, or an unruly young woman or an intemperate young man (as plenty of early modern tragedies do). Rather, he chastises the city leaders, including himself:

See what a scourge is laid upon your hate,
That heaven finds means to kill your joys with love.
And I, for winking at your discords, too
Have lost a brace of kinsmen: all are punish’d.

Those who would blame Romeo and Juliet for their actions sound suspiciously like Friar Lawrence at his most cowardly, or Lord Capulet at his most tyrannous: insisting that the children under their care cannot possibly know themselves, cannot possibly understand what they have done or what the need to do next, must surely mind their elders’ advice- or else. But it’s this very advice, this very world created by cowardly, tyrannous guardians that drives them to secrecy, violence, and death. Left to their own devices- at the party, on the balcony, in Juliet’s bedroom- their world is one of peace and poetry. The very last endearment that Juliet calls Romeo the morning after their wedding is friend.

From the prologue’s focus on the warring families, to the ending lines centered around Lord Montague, Lord Capulet, and the Prince, Shakespeare frames the play as a civic tragedy, rooted in the failures of those in power on scales both large (the city of Verona) and small (the Capulet and Montague households) to put aside their personal hatred and prejudice and properly rule. But within this frame— quite literally nestled in the middle of the lines from the prologue quoted above— Shakespeare places love. The two are essential to one another: the power structures which doom the young couple, and the love which will blow those structures apart.

One thought on “Don’t Blame Romeo and Juliet”